The Stone Circle at Castlerigg

The stone circle at Castlerigg (alt. Keswick Carles, Carles, Carsles or Castle-rig) is situated near Keswick in Cumbria, North West England. One of around 1,300 stone circles in the British Isles and Brittany, it was constructed as a part of a megalithic tradition that lasted from 3,300 to 900 BCE, during the Late Neolithic and Early Bronze Ages.

Various archaeologists have commented positively on the beauty and romance of the Castlerigg ring and its natural environment. In his study of the stone circles of Cumbria, archaeologist John Waterhouse commented that the site was “one of the most visually impressive prehistoric monuments in Britain.”.

The stones are of a local metamorphic slate, set in a flattened circle, measuring 32.6 m (107 ft) at its widest and 29.5 m (97 ft) at its narrowest. The heaviest stone has been estimated to weigh around 16 tons and the tallest stone measures approximately 2.3m high. There is a 3.3m wide gap in its northern edge, which may have been an entrance. Within the circle, abutting its eastern quadrant, is a roughly rectangular setting of a further 10 stones. The circle was probably constructed around 3200 BC (Late Neolithic/Early Bronze-Age), making it one of the earliest stone circles in Britain and possibly in Europe. It is important to archaeoastronomers who have noted that the sunrise during the Autumn equinox appears over the top of Threlkeld Knott, a hill 3.5 km to the east. Some stones in the circle have been aligned with the midwinter sunrise and various lunar positions. 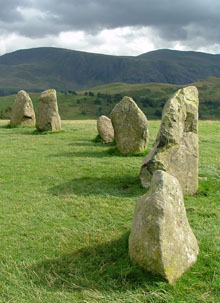 There is a tradition that it is impossible to count the number of stones within Castlerigg; every attempt will result in a different answer. This tradition, however, may not be far from the truth. Due to erosion of the soil around the stones, caused by the large number of visitors to the monument, several smaller stones have ‘appeared’ next to some of the larger stones. Because these stones are so small, they are likely to have been packing stones used to support the larger stones when the circle was constructed and would originally have been buried. Differences in opinion as to the exact number of stones within Castlerigg are usually down to whether the observer counts these small packing stones, or not; some count 38 and others, 42. The ‘official’ number of stones, as represented on the National Trust information board at the monument, is 40.

In the early 20th century, a single outlying stone was erected by a farmer approximately 90m to the south west of Castlerigg. This stone has many linear ‘scars’ along its side from being repeatedly struck by a plough, suggesting that it was once buried below the surface and also why the farmer dug it up. It is not possible to say whether this stone was originally part of the circle, or just a naturally deposited boulder.

The original motivation behind the construction of Castlerigg, its subsequent use and how this may have changed over time, is not known for sure. Current thinking has linked Castlerigg with the Neolithic Langdale axe industry in the nearby Langdale fells, with the circle acting as a meeting place where these axes were traded or exchanged. Ritually deposited stone axes are frequently found all over Britain, suggesting that their use went far beyond their mundane practical capabilities. Because of this, any exchange or trading of stone axes may not have been possible without first taking part in a ritual or ceremony. Castlerigg stone circle could have been the space in which these rituals and ceremonies were enacted.

Join our digital mailing list and get news, deals, and be first to know about events at Castlerigg Wine Shop!